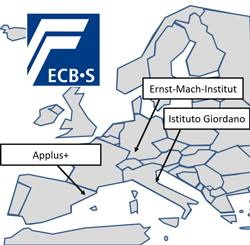 Caption:
ECB works exclusively with these three testing institutes in the area of burglar protection for secure storage units. 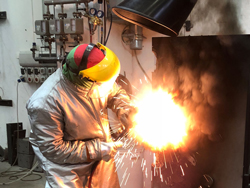 Caption:
ECB puts burglar resistance of safes to the test.

Frankfurt, 9 September 2019 You should be able to rely on tested security. But can buyers of secure storage units really trust that they will reliably protect their cash, jewellery and other valuables from thieves?

The European Certification Body GmbH  ECB has set itself the goal of ensuring exactly that. The certification body regularly puts safes in German, Italian and Spanish testing laboratories to the test. For example, testers from the Istituto Giordano in Bellaria, Italy, and in the Applus+ laboratories near Barcelona attack secure storage units in accordance with EN 1143-1 with brute manual force and electrical and thermal tools. In addition, the Italian inspectors and their colleagues at the German Fraunhofer Institut für Kurzzeitdynamik - Ernst-Mach-Institut (EMI) in Efringen-Kirchen use explosives to test the burglar resistance of the safes.

"We are aware of our responsibility and take comprehensive precautions to ensure that buyers of safes and insurers can rely on the certification marks of our certification body," explains ECB Managing Director Dr. Markus Heering. This includes a multi-stage recognition procedure, which every testing laboratory must go through in order to be allowed to test for ECB at all. The basic requirement is accreditation according to the international standard ISO/IEC 17025. The ECB cooperation partners are already accredited according to the current version 2017. After accreditation according to the new version, a "System Audit" follows, in which the ECB certification engineers put the personnel, equipment and internal processes of the laboratories to the test.

Only when this hurdle has been cleared may the testing laboratories measure themselves against the strict requirements of the ECB in two technical audits. If, in addition to testing safes with "basic and medium security", they then wish to be approved for testing safes with higher security levels, they must undergo a third technical audit. This is not the end of the recognition process either, as the certification body regularly carries out comparative tests between the testing laboratories in order to ensure high quality in the long term.

Trust is good  control is better

Recently in February 2019 ECB carried out a comparative test with tools ranging from crowbars and angle grinders to oxyacetylene torches on high security safes. The wide selection of tools is due to the different types of safes on the market. While some wall materials withstand attacks by angle grinders better, but are more vulnerable to attacks by oxyacetylene torches, the opposite is true for others. Also the door constructions of the products in the market differ partly clearly. "Even before the actual test, the test laboratories develop a suitable attack strategy for the respective safe, just as burglars do. EN 1143-1 deliberately leaves room for such individualized attack strategies in order to do justice to the variety of products on the market," emphasizes Heering. In order to ensure the comparability of the test laboratories, the so-called SECOTA (Security, Equivalent, Certification, Organization, Testing and Auditing) comparison test with standardized test samples was developed in cooperation with the security association ESSA e.V.. Each of the test bodies recognized by ECB goes through this test. "We proceed so conscientiously because we want to offer end customers and insurers an orientation that is based on comprehensible tests and information in a market that offers an ever wider range of products," says Heering.

To secure the test results, ECB carries out strict audits once or twice a year at the manufacturers of the secure storage units. ECB inspectors visit production facilities in Europe, Asia, North and South America and check whether the safes manufactured there are identical in construction to those tested in the testing laboratories. To ensure that no routines occur during the audits carried out every six to twelve months, ECB ensures that an auditor does not check the same manufacturer several times in succession.

"We agree with the manufacturers of the secure storage units that the trust of customers and insurers can only be won with strict and transparent tests," explains Heering. Therefore, ECB will make absolutely no compromises within the range of the examinations and audits.

Where can I get a new key or spare key for my safe?

What is the difference between a safe and a secure safe cabinet?

What are the costs for a certificate?

The LED on my lock is flashing.